The Synergy interlocking crochet square was designed specifically for the Friendship Blanket CAL. I love the slightly New Mexico vibe of this square, and working interlocking crochet in the round was a fun new technique for me to experiment. Below, you can get the full written pattern, free charts, and a full video tutorial to walk you through the square. I hope you love it as much as I do!

*Disclosure: Some of the links in this post are affiliate links, which means if you click on them and make a purchase I may, at no additional cost to you, earn a commission. Read full disclosure here.

The synergy square got its name because of the way the two colors work together to create intricate, interesting patterns that are much, much cooler than simple crochet meshes by themselves. I also think that a good friendship is synergistic – we’re better together than we are apart!

The Friendship Blanket CAL is a super fun project – a bunch of different crochet designers got together and each designed a 9″ square. They’re being released 3x/month, and you can get all the info about the other designs and follow along with fellow crafters in the Sunflower Cottage Crochet facebook group. If you don’t want to have to go to all the different blogs to get all the awesome squares, there’s also a pattern bundle available – you can get all 40 patterns from the CAL in one file for only $10.

If you’d like to purchase a printable PDF copy of this pattern, it is available from Ravelry or Etsy using the links below.

For this square, you will need worsted weight yarn in two colors. You can substitute different yarn weights, but it will affect your finished size, so if you are planning on using this square with other squares from the Friendship Blanket CAL, you will want to stick with worsted. Here’s what I used:

I have also made another copy of this square using Paintbox’s Simply Aran, but my finished size went up to about 10″. So if you’re using an Aran or heavier worsted, you may need to go down a hook size or finish the square a row earlier.

This square uses interlocking crochet in the round. (This technique is also known as interwoven, intermeshing, or double filet crochet). In interlocking crochet, every dc has a ch1 between it and the next dc. Corner stitches will have a ch4 between dc’s.

Except for the last row, each color only ever works into stitches of its own color. This effectively forms two meshes. The meshes are woven around each other as you work by changing whether you work stitches from the front of the work or the back of the work.

For an introduction to interlocking crochet, you can see this tutorial, though it is worked in rows rather than in the round.

There is also a complete video tutorial for this specific square (scroll down) in case you prefer video instruction. Each round in the instructions below also has a note telling what time in the video that round starts.

I recommend that instead of making your turn ch at the start of the next row, you make it at the end of the previous row so that you can more easily place stitch markers and make sure your starting chains are in the correct location, either in the front or the back of the work (this is noted in the instructions).  Placing a stitch marker in the loop that would go on your hook when not in use will help to make sure you don’t accidentally unwind your work when not using that color.

There is a chart at the end of the PDF for you to use. There are two versions – one with letters written on to identify front or back stitches, with row markings in bold every other row, and one that is blank.

In my example, color A is blue, and color B is gray.

Front Double Crochet (fdc): Working in front of the other color, double crochet into the dc on the same color row below, then ch1.

Back Double Crochet (bdc): Working behind the other color, double crochet into the dc on the same color row below, then ch1.

Front Corner (fc): Working in front of the other color, work (dc, ch4, dc, ch1) into the ch4 space of the same color row below.

Back Corner (bc): Working behind the other color, work (dc, ch4, dc, ch1) into the ch4 space of the same color row below.

How to Make the Synergy Interlocking Crochet Square

Charts for the Synergy Square

If you like to work with charts, you can download two different versions of this chart. The first version is a blank, color-only chart. The second one has f or b written on each stitch to designate which type of stitch you are doing, as well as having every other row marked in bold to help you keep your place.

Insert the ring between the two A color dc’s, just to the right of the working yarn of A color. You may want to pin the ring in place with stitch markers until you have finished row 1B.

[place working yarn of color A to the back] Working with color B, in ring, bc, (bdc, bc) three times, join to third st of starting ch. Ch4, place a stitch marker. (12dc)

This row is the last row of the square (hooray!). At the end of row 8B you should have done a ch3 instead of a ch4. Instead of making a chain between each double crochet, you are going to work blsc into the opposite color dc. So for this row, all dc’s are worked from the back into the B color dc below, and all blsc’s are worked into the A color dc below. This connects the two colors and makes a smooth edge!

Congratulations, you’re done with your Synergy interlocking crochet square! Make a bunch into a unique blanket, or find other creative uses – below, I sewed the Synergy square and a copy of the January square together to form a nice thick hot pad. I’d love to see your creations! (tag me @kickin_crochet on instagram!)

If you liked this interlocking crochet square pattern, you’re in lock, because there’s a lot more to come! Inspired by this design, I decided to design an interlocking crochet square each month this year. The January and February squares are already live, and the March square will go live in a couple of weeks – subscribe to the email list below to get notified when the latest squares are released!

This pattern and all associated images are copyrighted. If you would like to use this pattern in a roundup blog post, you may use 1 image and link to this blog post. You may not copy the pattern instructions. Thank you for supporting Kickin Crochet!

Hi, I’m Mary – crafter, science nerd, and mom of 4 cute kids! I’ve been crocheting since I was a child and started sharing patterns, tutorials, and other fun stuff through Kickin’ Crochet back in 2011. Check out About Me if you want more info, and happy crocheting!

Like what you see? You can support Kickin Crochet by Buying me a Hot Chocolate

Some links on this page are affiliate links, meaning if you click a link and purchase something, I may, at no additional cost to you, earn a commission. See full disclosure. 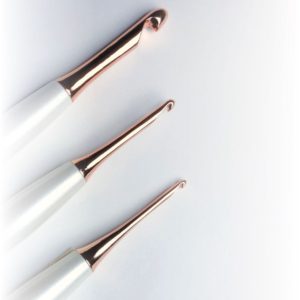